Occasionally, Mike talks to local farmers. Around December of 2017, he spoke to a man who sells to farms. They had beef cattle. Mike said “you’re gonna give me one of the calves right? I could use one. I’ll take one and give him a good life.” “We’ll see we’ll see,” he said laughing.

He liked Mike. So from then on, whenever he saw the man, Mike would say “where’s my calf? I want a female calf now. Don’t forget!” and they would laugh… it became kind of a thing.  Then one day it paid off.

He finally called to see if Mike was around. He said, “I have a surprise for you.” Immediately Mike knew it was a calf and he started preparing a stall for her. Sure enough, the man came with a tiny calf less than an hour and a half old that was covered in afterbirth.

The mother had had beautiful baby twins. She only had 3 teets though and wasn’t producing milk very well. So instead of sending one of the babies away, he brought her to Mike. Honestly, the man looked happy with himself that he did it! We know we are.
[/vc_column_text] 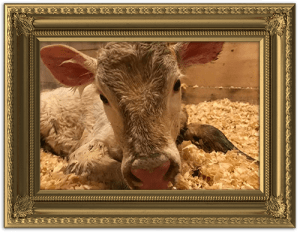