Mike received a call from a dairy worker in Connecticut saying they had a bull calf they would let go if he was interested. When he arrived at the location, he saw a tiny 2-day old calf. They said, “he’s with his mother because his mother is sick.” She was down with him on the ground.

They warned him saying, “the mother is beautiful but she doesn’t like people”. Amazed at this tiny little calf on the floor, he began talking to him & petting him. While he was doing this, the mom walked over and started chewing his beard.

The farmer walked over to Mike and started to cry. Mike said, “What’s wrong?” He said “I’ve known this cow for years and she’s never been nice to anyone. And now I have to take her baby away.”

Mike said, “if she doesn’t feel better soon, maybe I can take her too.” Of course, he was hoping he’d be able to take them both so that they wouldn’t have to be separated. A little over one month later, Mike called to ask about her. They said she had been up but was back down for 10 days now and that he could have her.
[/vc_column_text][/vc_column][/vc_row]

They still didn’t know what was wrong with her. Mike immediately sent the vet to examine her and found out that she milk fever calcium deficiency which had caused her to refuse to eat due to a loss of appetite.

As a result of not eating, she filled with gas and developed what is called “a twisted stomach”. She could not eat at all anymore and her body was starting to burn muscle so she was losing weight very quickly. 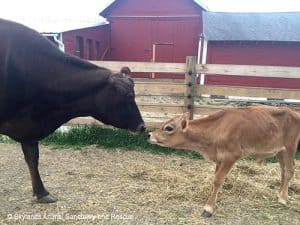 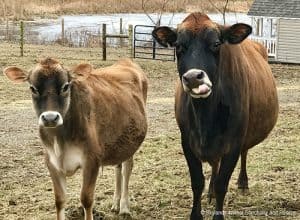 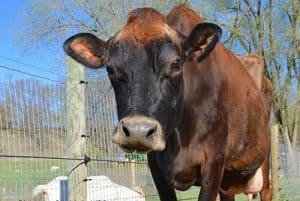 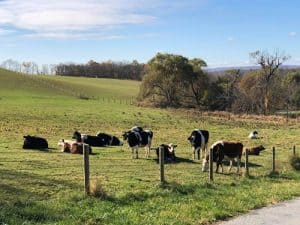 as soon as she saw her baby, she ran to him

Mike sent the vet again to operate on her at the farm where she laid, in order to untwist her stomach. She still would not get up on her feet, although she seemed to be feeling some better. Mike tried to get her up and couldn’t.

He turned his back to walk away for a moment and when he did, the farmer sneaked up and shocked her with a cattle prod. Mike was astonished as it was too late to stop him but she stood up on her feet. She spent two weeks in the hospital before she was released. Even after all that time apart, as soon as she saw her baby, she ran to him and wouldn’t leave his side. Now they’re living together and get to spend their time together all day every day.