Freddie escaped the slaughterhouse on January 21st of 2016. It was a small live market slaughterhouse in Queens New York. He escaped while being unloaded from a truck and was running the streets.

A friend called Mike and said, “…did you see that a bull escaped and is running the streets of Queens?” Immediately, Mike grabbed the trailer and drove toward Queens. He was calling the police and everyone he could think of to find out where Freddie was and where he would be taken. While still in transit, Freddie was caught and was brought back to the slaughterhouse.

Mike called them and within 5 minutes had the guy almost convinced to let the animal live. Then in the background, he could hear his brother yelled: “no you can’t give him away we’ll get sued for breach of contract a family already paid for him.” Then the guy said “No, he’ll be killed tomorrow morning 7 am. We’ll be here until 8 pm tonight.” By the time Mike got there, it was 7 pm but everyone had already left. It was very cold outside but Mike stayed in his truck overnight watching the doors and waiting and waiting for someone to arrive. In the morning it was still dark when a man came up and was fiddling with security gate. Mike walked up and a few more guys walked up and they walked right past Mike ignoring him and went in through the gate, leaving him standing outside. 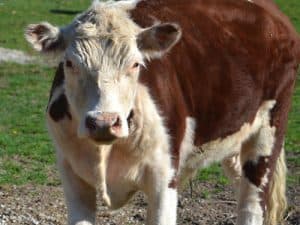 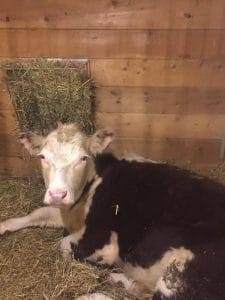 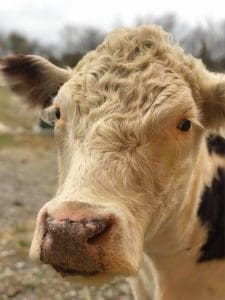 Mike got his composure and went inside and saw that it was a live market with a glass wall you can see through and a glass room where you can see the slaughterhouse. A small room where a woman sits to take money through a slot in like bulletproof glass. People could point and choose the animal to have killed right in front of them.

A guy with an apron with blood on it came back there and Mike pounded on the glass and said: “Hey I need to talk to you about that cow”. The man reached down, picked up a big bloody knife and turns it left and right, puts it in his belt, turns around and walks away.

…do you really want to stick with that story?

Five minutes later the man comes back. Mike pounds and yells and the guy ignores him. The guy looks up nervously because the glass started bowing in a bit. Mike said, “Hey man we need to talk about THAT COW”. He motions to the door at one end and opened the door. Mike jammed his foot in the door so that it couldn’t close. The man said “I don’t know anything about it. You’ll have to talk to my boss.”  A guy came running up the stairs and the two of them spoke for a moment in some other language. They said they sent the cow away to the farmer he came from last night. Mike said “Oh when? Last night?” He said “I’ve been here ALL night and no trucks came and went. Do you really wanna stick with that story?”

Another guy comes up and says “yea he’s here we’re supposed to kill him at 7 am. I’d like to give him to you but it’s not up to me I’m not allowed to. It’s up to my boss.”  Mike asks him to call his boss. The man opens a flip phone, dials, and hands Mike the phone. Within two minutes the boss is convinced to give Freddie to Mike. He immediately loaded him up and brought him to his forever home here at Skylands Animal Sanctuary & Rescue.