Mike decided to drive out to a huge industrial farm to be up close to one. He wanted to see first-hand what went on in such a place.  They have 36,000 dairy cows in one place where they try to “normalize” their treatment of animals. They hold tours so that people can come to see what they do. They state that they “process” 80,000 pigs per year.

He found himself on a giant farm that people go through on a bus, and where they take you through a milking parlor to see animals behind the glass. There is no smell, no way to experience the reality of it. The tour tries to make people feel that it’s all good. They answer everyone’s questions and don’t really hide anything about what they’re doing.[/vc_column_text][/vc_column][/vc_row]

There’s a concrete stage about 4 feet high that is shaped like semi-circle with a  mother on the left side with her baby with her already and then on the right side a mother having her baby. Everything is behind glass where you can’t hear or smell anything. Just to watch the animal. They said the mother who already had the baby is confusing the mother who’s giving birth. They said they have to remove the other mother and baby. They chased the other mother out and took her baby away in a wheelbarrow never to see her mother again. 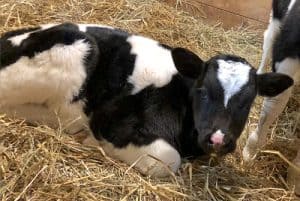 Everyone sits and watches the mother giving birth. A staff member goes up to help because the mother needs assistance. He drags the baby up by the mother’s face and announces it’s a boy. Everyone’s kind of happy in the audience except Mike. He knows that being a boy means that he will not get to live his life.

A little boy in the audience says to his father, “it’s a boy dad what do you think he’ll do?” The father replied, “I’m sure he’ll get to ride the tractor and stuff like you”. Complete disconnect. Mike quickly realizes that he must do something even though this place is so big.

So Mike starts asking around and saying he wants a calf. He needs a calf. He talked to 4 different people. He finally gets to a woman who says she’ll give him the name of a guy who has enough control. Mike calls the number something like 30 times and gets no answer and no voicemail machine. Finally, he calls the woman back explaining that the number just rings and she gave him some other guys number. Mike called that guy and got another answering machine. He kept calling. After 20 calls the man answers and says no, I’m not the right person here’s his number. This guy answers on the 2nd ring.

Mike invents a story about having a niece who’s a vet student that needs a bull calf to work on. He tried and tried to get one. The guy just kept saying that they were all sold. We have a someone that buys them but if you want I’ll sell you one for $150. So Mike changes the subject and talks about the man’s dairy farm and about the equipment to take him off guard. Then he blurted out, “so what are you gonna do? Are you gonna give me one of these animals or what?” I can’t just give you one you have to pay. Mike said, “you have more than a hundred just give me one”. And the man finally said okay.

…so what are you gonna do?

Mike hurried to the farm that had a section of 2400 calf hutches. Cameras and biohazard signs were hung around and were meant to keep people away… it was a very scary area. Mike couldn’t bring himself to choose which one so he asked them to choose one for him. They gave him Walter. All and all, Mike drove over 1,000 miles just to bring Walter home. He was one day old and only 90 lbs. He’s now doing very well and he lives with his younger “brother” Christopher.